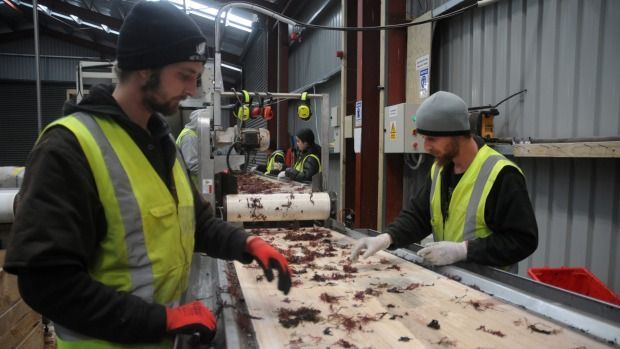 An innovative New Zealand company with a global market for its scientific, medical and food supplies has set up a factory in Masterton.

Neil Anthony, of NZ Manuka's Seaweed Division, said before getting a job with the company he had been out of work for seven years. Money was so tight that he couldn't go to the doctor or own a vehicle.

"Since working here I've got a car, I've been able to go to the chiropractor and the job is great, the bosses are cool, its a hell of a lot better than any other job I've had."

Seaweed manager Tony Croft said that when Anthony first started he struggled to adjust to working again but he soon came up to speed and was now one of their best workers.

"We find it hard to get him to leave," Croft joked.

Regional manager Lottie Rayner said founder Phil Caskey was enthusiastic about the change the company brought to their employees.

"Phil loves people, he's enthusiastic, inspirational and has an infectious attitude, he really wants to see people do well."

Caskey said the company was proud of its input into local communities up and down the east coast of New Zealand and that employees respond well to this and it created a good workplace.

"When busy we have up to 30 staff working at once in Wairarapa and we are also supplied by self-employed harvesters as well. There are interesting things going on in the seaweed operation because of technology around omega 3s and also research and development of fertilisers, it's a growing business," Caskey said.

The seaweed division harvests some of the highest grade pterocladia lucida in the world, a fern-like red seaweed that is used to produce agar which has applications in medicine and food manufacturing, Croft said.

Tim Clarke has worked at the Masterton plant for four months and loves the job.

"I wouldn't want to be anywhere else, I was surprised when I found out that they use the seaweed in foods, I'm comfortable here, it's great."

Back to In The Media