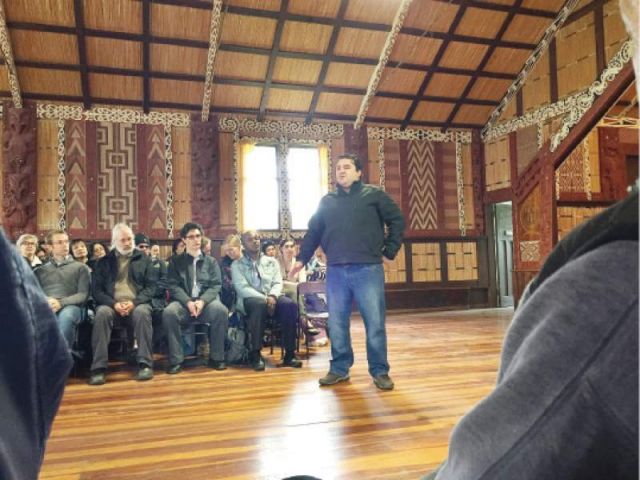 The first of four workshops aimed at building capacity for Maori to participate in science was held yesterday at Ruatoria’s Uepohatu Marae. The aim of the Vision Matauranga Capability Fund is also to help connect Maori and scientists, and to help scientists identify what Maori want from science.

Funded by the Ministry of Business, Innovation and Employment, the first day of the two-day Manuka and More conference began with presentations by scientists, academics and beekeepers. Topics ranged from manuka chemistry, genome research, genetic diversity and the microbial diversity of manuka, to the role of manuka in water purification, and honey industry impacts on indigenous biodiversity.

The second part of the workshop, held today at Hinerupe Marae in Te Araroa, was to be made up of presentations from Gisborne and East Coast organisations on recent developments and research priorities. Companies and organisations involved in today’s talks include Ngati Beez and Trees for Bees, Tairawhiti Bee Club and Phytomed Medical Herbs. Full coverage of the Manuka and More conference will included in The Gisborne Herald environment page and Focus on the Land.

Among presenters was Jerome Brosnahan of New Zealand Manuka Ltd who drew on case studies from Australia’s tea tree industry.

After the collapse of Australia’s tobacco industry, the Australian government pushed the growth of manuka — also known as tea tree. By 1998, however, an over-supply of tea tree oil and lack of market promotion saw prices fall and the industry collapsed. A decade later the industry redeveloped and began to grow again.

Honey production had raised the profile of manuka into an international icon, but the industry evolved on a scientific basis. Manuka oil was unique, anti-bacterial and a viable plantation model, he said.

Demand ahead of supply

Industry unity and strategic partnerships were important, said Mr Brosnahan. There was also the opportunity to add value by producing manuka oil and honey on the same plantation, and to develop products such as manuka oil-infused face masks.

Gisborne genetic scientist John Mackay of dnature talked about new and emerging disease in New Zealand bees and the development of a DNA test for the detection, and differentiation, of manuka and kanuka in honey.

“I’m not a virologist but I work on things that harbour a lot of viruses,” he said.

These include bee viruses, and pathogens such as protozoan parasites Nosema apis and Nosema ceranae that affect New Zealand bees. N. apis and N. ceranae cause dysentery in bees which has the potential to reduce a honey crop by 10-15 percent. Both pathogens decrease the bee’s life span and are associated with dwindling hives.

Before the destructive varroa mite hit New Zealand in 2000, few studies had been made on bee viruses. What the varroa mite carried was the problem, he said.

“Imagine a dirty great hypodermic needle full of viruses and inject that into bees. That’s varroa.”

Among earliest known viruses such as acute paralysis virus and Kashmir bee virus was the Israeli-associated paralysis virus which was thought to be the cause of Colony Collapse Disorder. This occurs when most of the worker bees in a colony disappear.

Mr Mackay described the DNA technology used to test for viruses that was discovered in the early 1980s as like looking for a needle in a haystack then creating from it a haystack of needles. In a Ministry for Primary Industries-funded project that ran from 2014-2016, genetic scientists developed a multiple DNA assay (investigative analytic procedure) to detect and differentiate manuka pollen from other pollens.

-As published in the Gisborne Herald here.

Back to In The Media