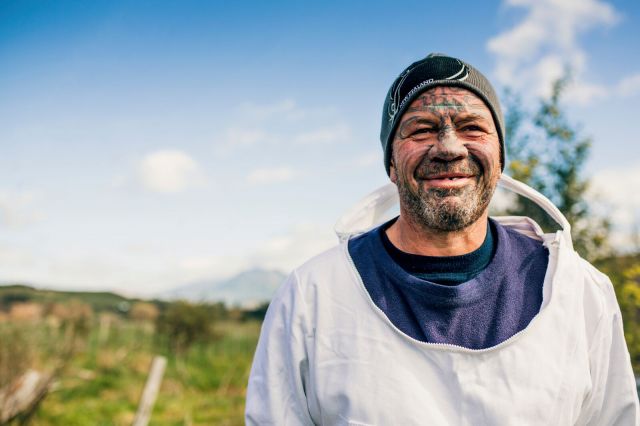 "My moko is to let the world know I am Māori, Ngati Porou, and proud of it," explains Tony Tuhou. "Some people are negative about it but I wanted to get it. I think it’s a personal choice." Although ‘moko’ is the most common term for all forms of Māori tattooing, specific terms describe moko applied to different parts of the body. The 'moko' traditionally refers to male facial tattooing, while 'kauae' is moko on the chins of women.

In pre-European Māori culture, high-ranking persons received moko as a status symbol. Receiving moko constituted an important milestone between childhood and adulthood. Apart from signalling status and rank, another reason for the practice in traditional times was to make a person more attractive to the opposite sex. Men generally received moko on their faces, buttocks (raperape) and thighs (puhoro).

Women usually wore moko on their lips (kauwae) and chins. Other parts of the body known to have moko include women's foreheads, buttocks, thighs, necks and backs and men's backs, stomachs, and calves. Tony got his first tribal moko at about 24yrs old, and has other traditional markings on his hands and body. "I saw my grandmother first before I got my face done, and she said she would happy. I had to ask my grandmother because I didn’t want to offend her. If she had said No then I wouldn’t have got it done but she was proud of me."

There has been a resurgence in the practice of ta moko for both men and women in New Zealand since the early 1990s. It signifys cultural identity, and is a reflection of the general revival of the Maori language and culture. Like other Maori rituals, ta moko derives from the mythological world of the gods.

The word ‘moko’ is believed to have originated from Rūaumoko, the unborn child of Ranginui and Papatūānuku. Rūaumoko is commonly associated with earthquakes and volcanic activity, and has been translated as ‘the trembling current that scars the earth’. The traditional markings used in moko are normally spirals drawn with great delicacy and elegance - one side corresponds with the other. While the marks on the body resemble foliage.