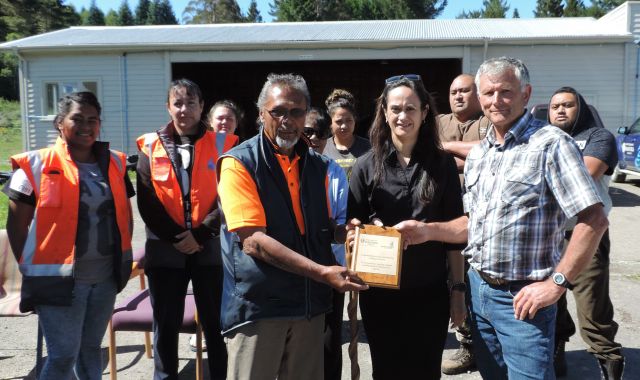 New Zealand Mānuka Group recently presented a plaque to the team at Minginui Nursery in recognition of the relationship as their first customer and for the incredible work done to turn the nursery into a viable business for the local community.  Ngati Whare general manager, Mere George, tells us of her role in helping to establish the nursery and the incredible impact this has had on the small, rural town of Minginui.

“It was a real boost for us to secure this relationship with New Zealand Mānuka Group,” said Mere.  “A lot of the work we are doing in and around the nursery is quite centred on the region of Minginui but having a significant company take on the first growing contract and willing to support what we are about, we hope will encourage confidence in other businesses to want to do the same thing.”

Minginui Nursery is a multi-million dollar iwi initiative tasked with returning the Whirinaki Forest to native bush.  In order to achieve their vision and goals, the nursery needed a large contract customer to help get the business off the ground.

Proud to be their first customer, New Zealand Mānuka Group ordered 30,000 Mānuka seedlings to support the development of their plantations on the East Cape.  While this represents only a small portion of our total planting programme, we wanted to support the Ngāti Whare-owned nursery due to the positive impact on the local community.

Mere is seeing the incredible results already, and, as she says, it’s not just financial but also from a social perspective in terms of providing employment, a local industry, creating an economy and bringing training opportunities to the village.

“From my point of view, the biggest impact has been in the jobs and employment created. We’ve also started to create opportunities in the education space for our youth to see and understand that there are jobs available which won’t take them away from home.

“I’ve spoken to some young children here and they’re already talking about wanting to work in the nursery when they’re older, like their mum or dad.  There’s a level of confidence and a huge level of interest from the community about what’s happening here.”

Mere is equally impressed with the dedication and commitment of the people currently working at the nursery who have had to learn new skills to be part of this exciting new operation.

“We’ve got an awesome group of employees that are dedicated and wanting to see this thrive, they’re excited about the contracts with New Zealand Mānuka Group because they see the purpose to the work that they are doing – that really pays dividends.”

Karl Gradon, CEO at New Zealand Mānuka Group, says the decision to support Minginui Nursery was a simple one, “Minginui needed a customer to get off the ground and we needed Mānuka seedlings for our east coast plantations.”

“It was of benefit to us to know that the money we were spending was going back to the community and providing this town with employment and income opportunities that weren’t available previously.”