The East Cape is heaven on earth 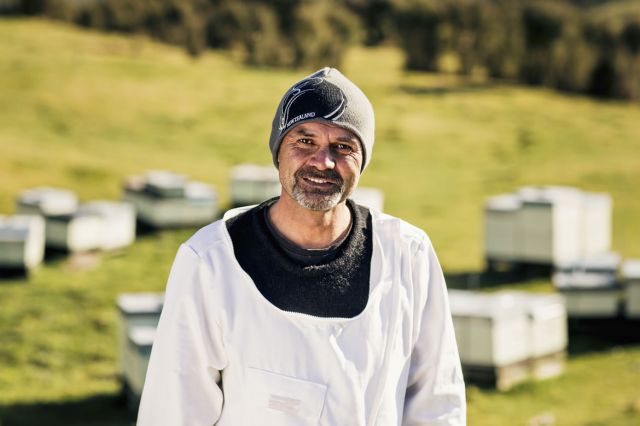 Norm Parata grew up in Te Poia, East Cape, NZ. His mother is also from East Cape and he is now proud to be able to watch his grandchildren grow up here. "To me this is heaven on earth – you’ve got the rivers, the sea, the land. It’s beautiful here. This is home, this where I belong. I love the lifestyle and the people." Each day starts with Norm meeting his beekeepers at their shed and making a plan for the day depending on the weather.

On a fine day they will get out beekeeping but on a gloomy or rainy day they work in the shed preparing boxes or frames. But beekeeping is not just about making money for Norm, it's also about relationships and being able to live in this beautiful remote coastal region. "You wake up here, the birds are whistling and the cows are mooing," explains Norm. "There’s real freedom and peacefulness living here."

"We’re a tight community. It’s like we are all related and we know each other so well so we look after each other in general. Kids are a big part of our lives." Norm grew up with many of the people he is now working with, which is why he is so pleased to see the landowners finally get paid a proper return for allowing hives to be placed on their land. "It’s good to see the landowners finally getting paid properly, instead of being ripped off by all these hit and run beekeepers." NZ Mānuka is the first business in New Zealand to establish an open partnership between the beekeepers, landowners and manufacturer.

This partnership ensures everyone who contributes to the process, from land to customer, gets a fair and equal share of the income generated from sales of the honey or oil products. "NZ Mānuka pays our landowners well," agrees Norm. "They’re finally getting paid what they’re worth. Instead of the other way where the outsiders came in and took all this honey off poor old nanny’s land that has been handed down to her through generations.

They would just drop off a couple of jars of honey at the gate. But how much had they taken from her land?" Norm started beekeeping in 2002/2003 when his brother and sister bought 250 hives, and asked if I would be interested in beekeeping. Since then, he has never looked back. Now Norm is hoping his sons and grandchildren might continue with beekeeping as well. "When you come up here, you respect the land. It’s a spiritual place up here."