Helping to Make the World a Better Place 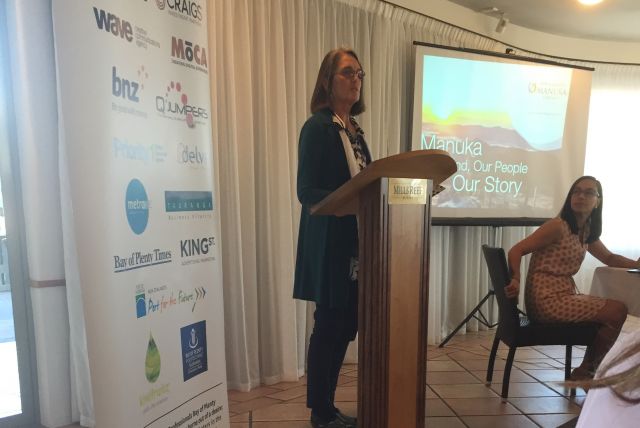 Speaking at a marketing professionals meeting in Tauranga recently, the enduring message Sharan Caskey left with the guests is Phil’s desire to make the world a better place not only for his children and grandchildren but the wider community too.  In a world of businesses driven by profits, guests were impressed to hear from a large organisation driven by integrity and transparency.

“Phil wants to make a real difference and he believes a better way of doing business is through empowering people to create a better life for themselves,” explained Sharan Caskey, Operations Manager, Seaweed and Oils from New Zealand Mānuka Group.

It was a surprising message coming from a major shareholder and director of one of the regions’ largest and fastest growing Mānuka businesses.  But it was an important one that hit home with everyone in the room.

Invited to speak at an event organized and run by the Tauranga marketing professionals group, MOPED, Sharan Caskey represented New Zealand Mānuka Group in telling their story of growing a business from the ground up, into the highly successful, award-winning organisation that it is today.

“New Zealand Mānuka Group is built on product, business partners and vertical integration,” explained Caskey.  “Phil is the visionary but I’m the workhorse - I set up infrastructure, systems and organize people.”

“The reason we have been able to grow at speed is because, in his mind, Phil sees no barriers and quite often he will just get out and do it himself. People see this and want to be part of his vision too.”

Describing their highly collaborative approach to doing business, one of their founding aspects has been in establishing transparent, 10-year profit sharing contracts with their landowners and beekeepers which see each sharing 35% of the gross profit.

As Caskey explained, “The difference to these people’s lives is absolutely enormous.  We had one landowner who had made only $7,000 in a year from a previous beekeeper dropping 600 hives on their land.  In our first year working with them, we dropped 400 hives on the land and paid their 35% share which worked out to be $143,000.”

Sharing their stories of the land and their people has been the focus of New Zealand Mānuka Group’s marketing efforts to date.  Attendees left the event feeling heartened and inspired that the world can be a better place and our businesses can make a difference.