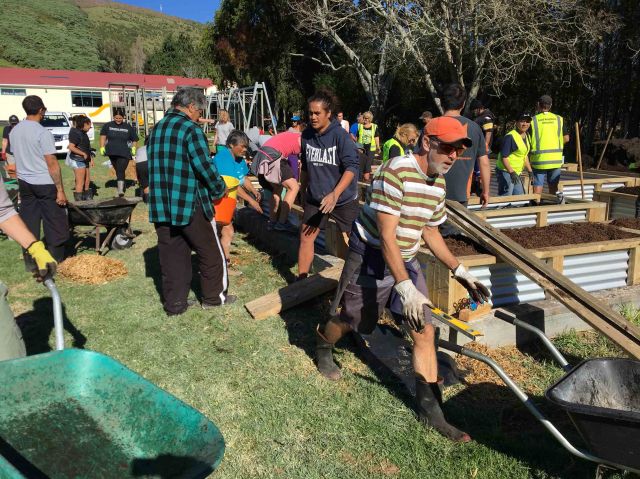 With a vision to transform the school grounds into an edible landscape for the children and local community, Otepou School got a jumpstart on the first stage of their project with sponsorship and the donation of eight cubic meters of Kōlush garden mulch from New Zealand Mānuka Seaweeds.

Otepou School Project Manager for the edible landscape vision, Nicola Douglas, said the kids had been doing lots of fundraising so far this year to build a raised garden maze designed by the children.  With New Zealand Mānuka Seaweeds offering the gap in funds needed as well as supplying all the mulch required, the school was able to move forward with their project much sooner than expected.

“Without the funding from New Zealand Mānuka Seaweeds we wouldn’t be here doing this work right now,” says Douglas.  “The product they have given us is absolutely amazing too – it smells and looks so beautiful.  Everyone is loving working with it.”

Established in 1896, Otepou School was originally called Papamoa Native School.  Now with a roll of 65 local children, many are 6th generation students directly descended from the students who attended the school when it first opened.

Douglas agreed the project was not just about building the raised gardens but about bringing families together for the future of their children and community.

“One of our projects is to build a food storage space which will be a shelter to keep our excess kai which will be available to any of our families in need,” says Douglas.  “People will be able to stop in and take what they want and leave a koha if they can.”

Other projects also planned as part of the edible landscape vision will be a pizza oven and hangi area, fruit trees, chickens, bees and other plants planned for the circumference of the school.

Once built, the children will be planting winter vegetables including beetroot, silverbeet, cauliflower, onions and garlic into the raised gardens.  Come spring, they will plant summer vegetables and be encouraged to take their produce home to eat what they have grown.

School Principal, Vianney Douglas, was also one of the 50-odd whanau and local community helping out on the day.  She was also very grateful for the support from Good Neighbour who had experienced gardeners directing the build of the gardens.

“We are following their good advice.  We’ve got three layers of the mulch in our raised gardens which I think is going to be awesome for growing our vegetables for the kids.

“The mulch looks beautiful.  As soon as I saw it I thought it just smells so beautiful!”